The EU is a huge system of systems. In our previous blogs on the subject we have shown how the resilience of this system is still very low – just over  60% – and how its dynamics is difficult to govern and steer.

Both those in favor and against the so-called Brexit are producing numerous arguments, projections and estimates on a daily basis. While economists, politicians and central bankers still haven’t figured out how to counter the deflationary forces and slow recovery at EU level – which is a major ‘systemic’ issue –  it is surprising to note how the effects of a hypothetical Brexit are already so easy to predict by both sides. Given the immense complexity of the issue at hand it is difficult to make any forecasts at all. Even for the whole system!

Our contribution to the discussion follows a different approach. The idea behind a quick-and-dirty analysis is to evaluate the resilience of the EU with and without the UK. To that end we use EuroStat’s macro-economic data which it publishes on a quarterly basis. The Complexity Map of the UK based on that data is illustrated below.

At present, the UK has one of the most resilient economies in Europe, close to 80%. However, the EU as a system has a much lower resilience, a mere 61.24%. The Complexity Map of the EU (including the UK) is shown below. The total number of macro-economic parameters in this study is 1016. 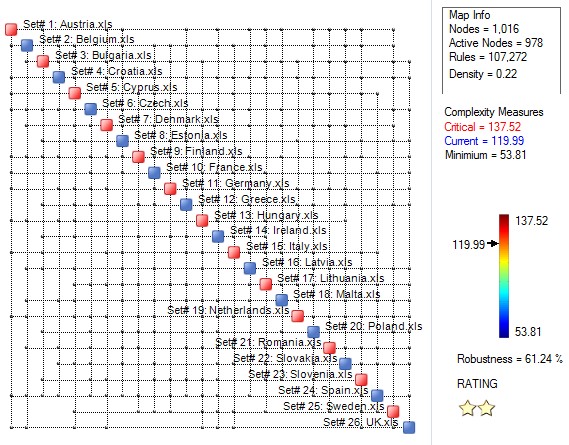 We now repeat the analysis ‘removing the UK’. The result is reflected below. 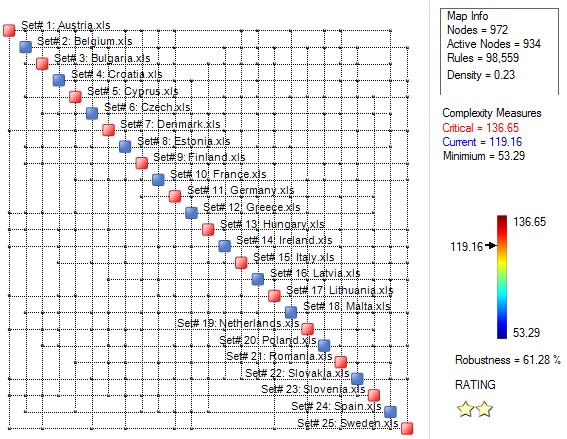 The result is surprising. The complexity of the system drops – as expected – but only by a tiny fraction and resilience remains unchanged. In other words, based on this simple analysis the departure of the UK from the EU would not impact the EU’s structural properties such as complexity and resilience. Evaluating the effects of Brexit  on the UK is a totally different matter. However, given the high resilience of UK’s economy today one could say that it is well-equipped to face shocks and destabilizing events such as a hypothetical Brexit.

0 comments on “Would Brexit Influence the Resilience of the EU?”