In our recent blog on the “corrected ” S&P ratings of the Eurozone, we showed how the spread between sovereign bond priving was artificially high. In this article we look at the REAL debt of each country.

In a recent article published today we read (shortened version):

“…. the study by a German Research Institue (Stiftung Marktwirtschaft) states that the most virtuous EU country in terms of public debt is Italy, much better than Germany. And this was according to data from 2010, before the “technical” government of Napolitano and Monti.

The foundation has compiled a ranking of the long-term sustainability of public finances of the 12 founding countries of the euro. It considers the debt which is commonly understood by German researchers as “explicit” (that which in Italy represents about 120 percent of the gross domestic product), together with the ‘implicit’ debt due to an aging population: in essence, it means spending on pensions, health and care that you expect to pay in the future.
And here comes the fun part. For Italy, even without the pension reform of minister Fornero, let alone the repeated tax increases of the last 12 months, the country had the best indication of sustainability in relation to its GDP (146%) followed by Germany (192.6). France is at an altitude of 337.5, 548.5 in Spain, Ireland closes at 1497.2. The German data are explained by an expected increase in future debt caused by the tax reform, pension reform (integration checks minimum) and increase of health benefits for the elderly. According to the Foundation in Berlin, in 2050 the State and Länder will spend 1.36 trillion euro for pensions and salaries of civil servants which adds up to a ‘explicit’ debt of about 1.9 trillion.
The situation is very different in Italy. Although burdened by the second largest “explicit” debt after the Greeks, we expected a very small increase in public spending (pensions, health care) for the elderly. “Italy – according to the study – not only precedes clearly the “Locomotive Germany”, but also all other Eurozone countries because it can count, in the long term long-term, on a positive development of public finances.”
The research of the Stiftung Marktwirtschaft fixed in 146 per cent of GDP (118.4 ‘explicit’ plus 27.6 ‘implicit’) finds that the ‘true’ Italian debt is the best in Europe. Germany combines a 83.2 “explicit” with 109.4 per cent ‘implicit’. Total: 192.6 percent, worse by the 30 per cent compared to Italy. The second lowest, even worse than Greece, Luxembourg, which has a public debt “explicit” equivalent to just 19.1 percent of GDP: negligible. But under the Grand Duchy is about to explode a demographic bomb benefit that jacks up sustainability report to an altitude of 1115.6.
“Given the low growth, the primary surpluses will be enough to stabilize the public debt in the coming years, but will remain far from reducing it significantly,” says the report of the German foundation.The problems are two: the amount of “explicit” debt and the outlook for public finances in the short term. “
The third facet of a country’s real debt which we think would be necessary to incorporate into the big picture is that of the indebtedness of families and private individuals. That would complete the picture and provide a more solid basis of the rating of a nation’s economy. In fact, if we consider private debt of 160% of GDP as an alarm trigger, only four EU countries are below this threshold: Greece (124.1), Italy (126.4) Germany (128.1), France (159.5). At the bottom of the list we find  Cyprus (289.2), Luxembourg (253.9) and Portugal (248.5). A slightly different picture than the fragmented messages we get in the media, isn’t it? 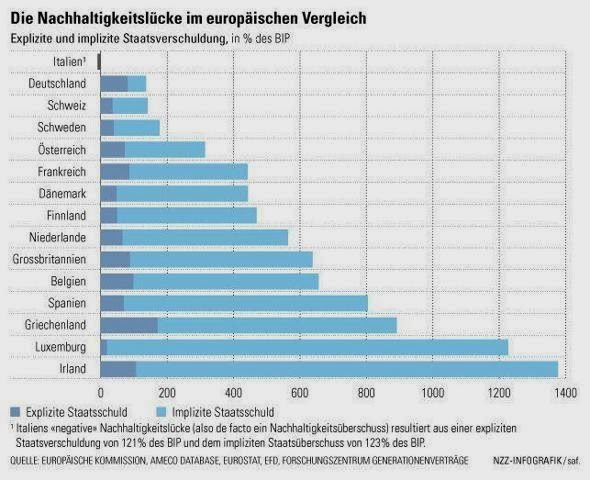 0 comments on “The REAL Debt of EU Countries”