It is known that Deutsche Bank is in trouble and, according to some, it poses a huge threat to the stability of the global financial system. Read here.

On October 29-th, 2015, “The Bank announced a series of measures to reduce complexity and costs” and that the strategic goal was to “Make Deutsche Bank simpler and more efficient”. Read here.

Based on the above announcements, Ontonix performs in early November 2015 a complexity assessment of over a dozen European systemic banks, including Deutsche Bank.

On November 9-th, 2015 the results of the study are published in our blog entitled “Deutsche Bank – Too Big To Fail or Too Complex To Survive?” (may sound like an oxymoron but it’s probably both).

The result was that Deutsche Bank is not only highly complex, it is also the most complex of EU’s systemic banks. The ranking is indicated below. 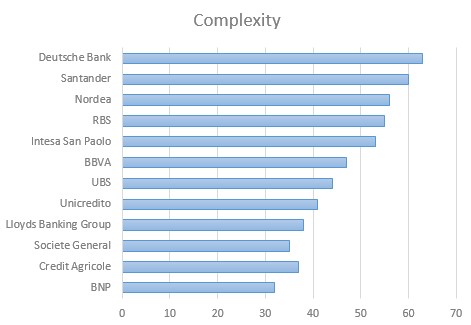 “The bank is too complex and too big,” said Enrico Racioppi at Hammer Partners SA in Lugano, Switzerland, who has a sell rating on Deutsche Bank shares.  “It’s a difficult task that John Cryan is trying to sort out.”’. Read here.

And now, guess which parameter in our analysis of November 2015 has been identified as the main contributor to the complexity of the bank? You got it, it’s the branches, i.e. “Number of Outlets and Branches“. The chart below – called the Corporate Complexity Profile – provides a ranking (in %) of the main complexity drivers of Deutsche Bank as based on the analysis of its ratios. Tha branches are right at the top!