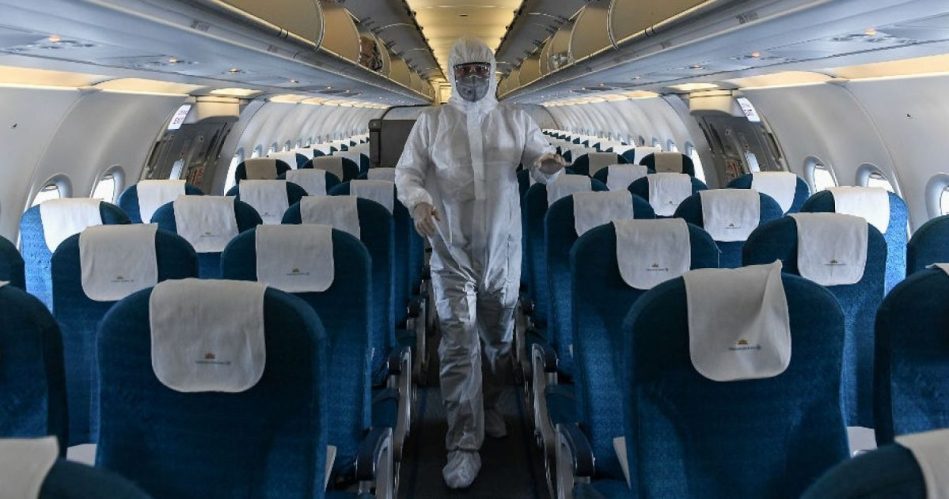 The coronavirus has been with us for a few weeks now.  The amount of information, speculation, fake news, statistics, extrapolations and more or less credible and sinister and conspiratory theories, is overwhelming. It is easy to have an impression, it is more difficult to have an opinion. It is very easy to develop fear, paranoia, and emotional disorders. It is not all surprising that the media, all the media, right and left, are working in uncharacteristic unison to propagate bad news and fear. There is no news like bad news. This reminds us of Elliot Carver’s world domination speech from the 007 movie Tomorrow Never Dies.

While it will take some time to appreciate – if at all possible – the dimension and depth of the crisis and of its consequences, there are questions and doubts which may already be raised today.

Worldwide, the flu results in three million to five million cases of severe illness and 291,000 to 646,000 deaths annually, according to the World Health Organization. This is immensely more than the 25,000 coronavirus deaths at the time of writing. Just to put things in perspective (this is always a good idea) the top ten killers today are: 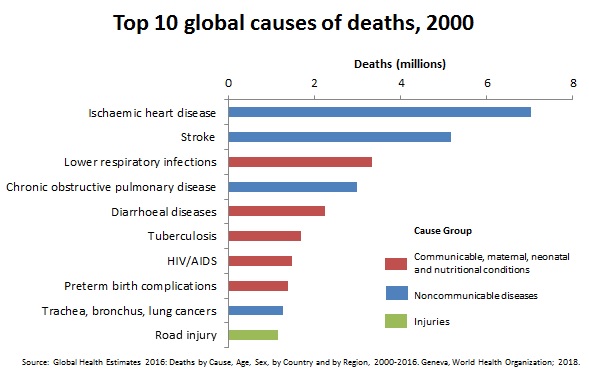 Some of the deadliest infectious diseases, setting aside the Spanish flu which killed 100 million people, are:

HIV/AIDS – To date more than 30 million people have died of AIDS with nearly 40 million currently infected.

Tuberculosis – Tuberculosis is highly infections kills around 1.5 million people worldwide every year, second only to malaria and has a mortality rate of 50% is not treated.

Cholera – One of the most infectious diseases, it kills around 120,000 each year.

From Scientific American (“How Does the Flu Actually Kill People?”):

“But sometimes the immune system’s reaction is too strong, destroying so much tissue in the lungs that they can no longer deliver enough oxygen to the blood, resulting in hypoxia and death.

In other cases it is not the flu virus itself that triggers an overwhelming and potentially fatal immune response but rather a secondary infection that takes advantage of a taxed immune system.”

The coronavirus infection triggers fever and coughing. It then leads to shortness of breath. In severe cases — such as pneumonia — nCoV infection could lead to gastrointestinal problems, as well as kidney failure, according to the US Centres for Disease Control and Prevention (CDC).

In both cases, flu and coronavirus, it starts with the lungs and, potentially multi-organ failure and shock.

So why this obsession with the coronavirus?

The coronavirus matter has been rather quickly elevated to the level of pandemic (but a few weeks ago, according to the WHO, it was not).

We don’t know how far contagion will progress or how many will die. Math models are unreliable. Remember, the most important things in a model are those it doesn’t contain. You can be practically sure that you have left something out in your model. Someone who has been building models for over 30 years, like the undersigned, learns not to trust them. This is one reason why our company has been investigating and using model-free methods for a decade and a half.

But models aside, let’s look at data. As of the time of writing, this is the situation:

What is striking is that in the USA, China, Germany and S. Korea, the coronavirus causes between 2 to 4 deaths per million inhabitants. In other advanced countries, like Italy and Spain, 136 and 93 respectively. That is 20 to 50 times more. Why is this so? How are the Germans different from the Italians (apart from the fact that in Italy we have better food and make better sports cars)?

It appears that it is all a matter of accounting. In Germany they count only those that die of coronavirus alone, and not those that have the coronavirus in addition to a bunch of other severe chronic diseases, like diabetes, heart problems, hypertension. In Italy, the ISS informs that around 99% of the deceased are elderly individuals with  an average of 2.7 chronic diseases. This means that the remaining 1% or so, would bring the 136 deaths per million close to 2, in line with China for example. Actually it would be closer to 1.5 deaths per million inhabitants. But there is more. Italy counts all those that died and had caught the covid-19, independently of where they had died. In Germany they count only those that have died in hospitals. Italy is in full lockdown, Germany isn’t. That’s why the Italian economy is suffering much more than in other countries.

Suppose you have a couple of nasty chronic diseases, A and B. And then you catch the coronavirus, C. From A+B you go to A+B+C. You die. Question: what did you really die from? Linear thinking suggests that you died of C. The logic is that if you don’t get C, you can live (a little longer) with A+B. Another way to see it is that if you had neither A nor B, C wouldn’t kill you. The truth lies probably in the middle, but it also depends on the age group one belongs to. A+B in an elderly person is not equal to A+B in a younger one.

Italy, according to Health Care Rank, has one of the most efficient health systems in the World: 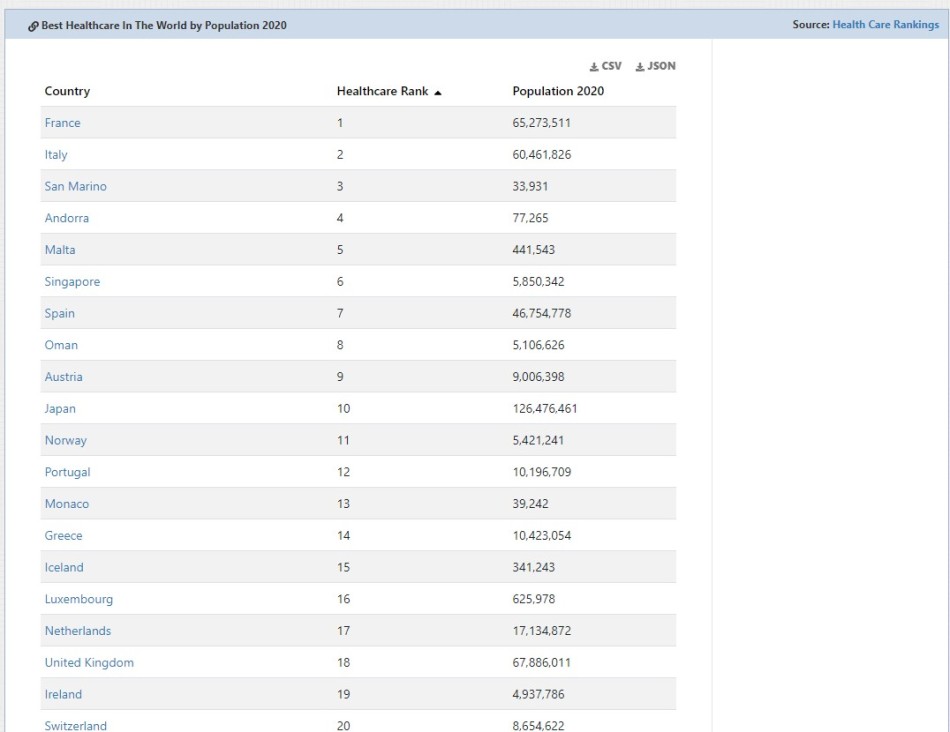 Spain and Italy are also the healthiest countries, according to a Bloomberg ranking: 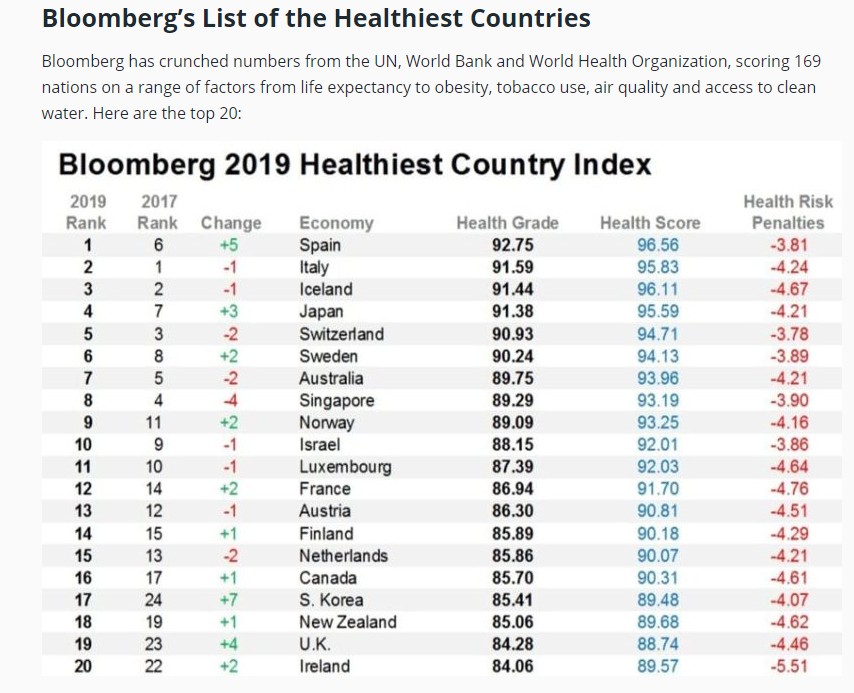 Surprised? So why do these two countries have such a huge mortality due to the coronavirus? Is it just a matter of creative accounting? Things just don’t add up (clearly some will surely blame it on climate change).

You will read in the press, foreign and Italian, that the health system in Italy is in a state of collapse.  Here is the definition of collapse (Merriam Webster):

“to fall or shrink together abruptly and completely”, “to break down completely”.

Well, the health system in Italy has not broken down completely, it has not disintegrated. It has not collapsed. It is saturated. It is working at, or close to peak capacity.

Wisdom starts by calling things with the right words. Saturation is not collapse. It is actually almost quite the opposite – a collapsed system doesn’t work at all, a saturated system is doing the best it can (OK, not necessarily with the highest efficiency). Again, there is no news like bad news. The media prefer to say “collapsed” instead of “saturated”. They must spread fear. Fear is big business. It helps to obtain huge leverage on society.

So, setting aside the clinical aspects, what are the consequences of this crisis today?

Now the economy may bounce back. It probably will recover. However, when governments are able to control citizens, to reduce their personal freedoms, no matter what excuse or ploy they resort to, they rarely give it back. After 9/11, your luggage will always be thoroughly checked at an airport, you will always need to put your belt and wrist watch (only 007 has exploding watches!) under an X-ray machine, everyone will see what cosmetics you use, and some guy will touch your legs and crotch looking for nonexistent hidden guns or explosives. All in the name of our safety (and to the delight of security companies and agencies). This will never cease.

After the coronavirus social experiment is over, the system will never stop spying on us and restricting our movements. After the coronavirus, any excuse to confine and control the population will work. The media will see to it by spreading fear. The system rarely wastes a good crisis. The progressive loss of freedom is like the law of entropy – it either stays the same or it increases.

It is said that the Chernobyl accident triggered the collapse of the Soviet Union, and later of the Bolschevik empire. It may just happen that the coronavirus will be the trigger of the dissolution of the European Union, which, in this case as in numerous other cases, is not much of a union at all. This would certainly be an unwanted outcome, unwelcome by the elites, but it would be a glorious manifestation of how highly complex and fragile  systems can suddenly develop non intuitive dynamics, without any outside orchestration or a master choreographer.

1 comment on “The Coronavirus – Never Waste a Good Crisis.”